With Bitcoin passing $11,000 recently (October 2017) I had a few friends reach out and ask about Bitcoin. As many of you know, I completed a Masters in Digital Currency from the University of Nicosia in the spring of 2018. This post serves as an introductory primer to cryptocurrencies for non-technical folks. I will attempt to stay at a high level and will talk about cryptocurrencies as a whole rather than Bitcoin individually. There are many areas that I skim over (such as mining and proof-of-stake) which will be a separate blog post after this one.

There are hundreds of cryptocurrencies, and many of them are very similar, so rather than focusing on Bitcoin, I’ll talk about cryptocurrencies in general. I may generalize some points.

For those of you who might be technical, I welcome feedback, keep in mind that the audience I’m going for is looking to purchase their first cryptocurrency.

Before you jump in, please note that cryptocurrencies are highly speculative and could crash at any moment. The following is not investment advice and please do not invest/gamble money that you cannot afford to lose.

How do cryptocurrencies work?

The concept of digital money has been around since the 1990s. There are many digital currencies including Facebook credits, specific gaming currencies, and even gift cards. These digital currencies are centralized meaning they are controlled by a single company. The account balances get stored in a database, and when you sent credits to someone, your account is debited and their account would be credited. From a simplistic view, this is how bank accounts work.

The problem with centralized currencies is that the database is controlled by a third party and could be a single point of failure. If you did something the issuer didn’t like, they could impose fines or confiscate your funds. If the centralized database was hacked, your money could also be reallocated or stolen. With a centralized model, you are trusting a third party with your “money.”

Cryptocurrencies are different because they use a shared public ledger to keep track of funds. The ledger is distributed across a peer-to-peer network that consists of miners, nodes, and users. The miners and nodes keep a full copy of the ledger, known as the blockchain, which records every transaction that has ever happened. This blockchain/ledger is propagated across the world and is cryptographically checked approximately every 10 minutes using a process called mining. In basic terms, the miners on the network look for pending transactions on the network, check to make sure they are valid and that the funds have not already been spent and add them to the blockchain. The miners take a small fee from each transaction and are rewarded with 12.5 new bitcoins for each block mined. There is much more to mining, but that will be a separate blog post.

There are a few ways to get cryptocurrencies, however, for the majority of the readers, the easiest way to get in is through an exchange. I use Coinbase (affiliate link) to convert fiat currency (a currency that is issued by a government, such as US Dollars) into bitcoin, litecoin or ethereum. My Coinbase account is linked to my bank’s checking account and I can transfer fiat currency between them. Be warned that some banks do not do business with cryptocurrency exchanges and will shut down accounts that do so. Coinbase is legally required to operate like any fiat exchange in the United States and must comply with Know Your Customer (KYC) and Anti-Money Laundering (AML) laws. As such they will probably ask for your identification which is one of the main reasons bitcoin is not anonymous.

Otherways of acquiring cryptocurrencies is to request them as payment for work, think freelancers, or to trade bitcoin for cash in real life. If you would like, I might be willing sell you some bitcoin or litecoin in real life (minus the fees and probably a beer).

A single bitcoin/litecoin is divisible into 1 million units called satoshis (for bitcoin). This is similar to how a US dollar is divided into 100 pennies. Because of this division, you don’t have to purchase a whole coin. In fact, the first time you try this, it might be best to buy a small fraction, say $50 worth. This way you can test the process out in a relatively stressfree setting.

A few days have passed, and you have received an email from Coinbase that your cryptocurrency has been deposited in your Coinbase account. If you bought bitcoin, there is a chance that the price has changed drastically! Don’t panic, because as mentioned above, you invested/gambled money you could afford to lose, right?

When you purchase cryptocurrencies from an exchange you don’t own the coins; you own an IOU for that cryptocurrency. Think of an exchange like a bank. You have an account at the bank with money in it, but you don’t possess the money. The bank can use that money to lend to others, you just have an IOU for that money that you can redeem at any time. Banks are considered safe in the United States since your deposit is insured through the FDIC. With exchanges, you are trusting the exchange to keep your funds safe, and there have been many instances where crypto-exchanges have been hacked, lost money or were straight up frauds. Not trusting exchanges could be an entire post, if you are interested, learn about what happened with Mt. Gox.

The ideal solution is for you to become your own bank and hold the keys to your funds yourself. The simplest is to download a trusted mobile wallet from the App or Play Store. For Bitcoin, I would recommend Copay, I use the iPhone version, but they also have an Android version (I haven’t used it though). Their code is opensource, and anyone can audit it for security issues. Using a trusted wallet is crucial because this app will hold your private keys it contains the access to your funds. More on the public and private keys in the next section.

Another option is a hardware wallet such as the Trezor, seen on the right. This device holds your private keys and is ideal for more significant amounts of currency that you are holding for the long term. There are other hardware wallet options out there that I’m sure are fine but I haven’t used them so I can’t recommend them. 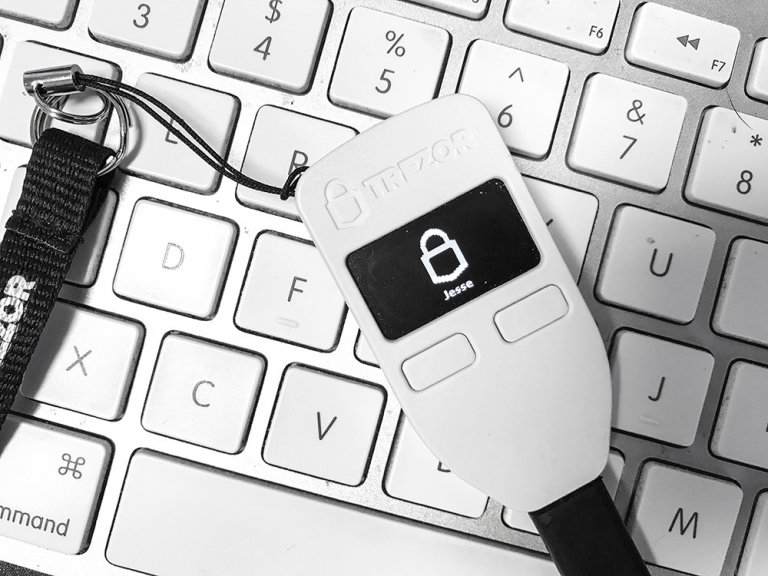 A third option is to store your keys in the real world using a paper wallet. I haven’t used this method so I’m not going to go into it.

The wallet does not hold your cryptocurrency; it holds the keys to your cryptocurrency. The currency is stored in the shared ledger and not on your device or wallet. Your wallet only contains access to your funds, not the funds themselves. In the beginning, this is probably the hardest part of cryptocurrencies to understand.

Setting up your wallet

When you set up your wallet, you are prompted with sixteen words that are called a seed. Write these words down on paper and never type them in a computer. The seed is used to create the public and private keys. This mnemonic code was introduced in 2013 and makes it easy to recover wallets that have been lost. For example, if you switch phones you can type this phrase into your new phone and your wallet will be copied to that device. I say copied and not transferred because the wallet can live in multiple places because it doesn’t hold the cryptocurrencies, just the access (keys) to them.

Transfering funds from the exchange to your wallet

The wallet contains a bunch of addresses that can be used to send and receive currency. With Bitcoin and Litecoin an address is only used once and is completely depleted once used. Your wallet will take care of this. How wallets combine inputs to create transactions should be its own post. Open your wallet (app, hardware wallet or paper) and find an address that can receive bitcoin into your wallet. This will either be a HEX string or a more likely a QR code. 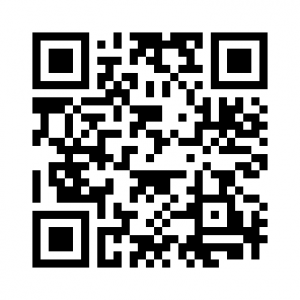 For example 1Nr6s8ayHmi5Bq5bo7BtJkjGQeMsXYfmJB, or the QR code above. This is address belongs to me, do not send money to this address unless you want to. Remember, cryptocurrency transactions are not reversible so if you do send money, you will need to ask me to return the money in a separate transaction.

From your exchange, click on your account and go to send. In Coinbase, a window will popup asking for the recipient address that you want to send the money to; this is where your wallet’s address will go. Next, specify the amount that you wish to send. At the time of this writing, the fees on the bitcoin network are relatively high. The example on the shows transferring .003BTC (or $29.27) for $4.20. Fees have come down significantly since the writing of this post. 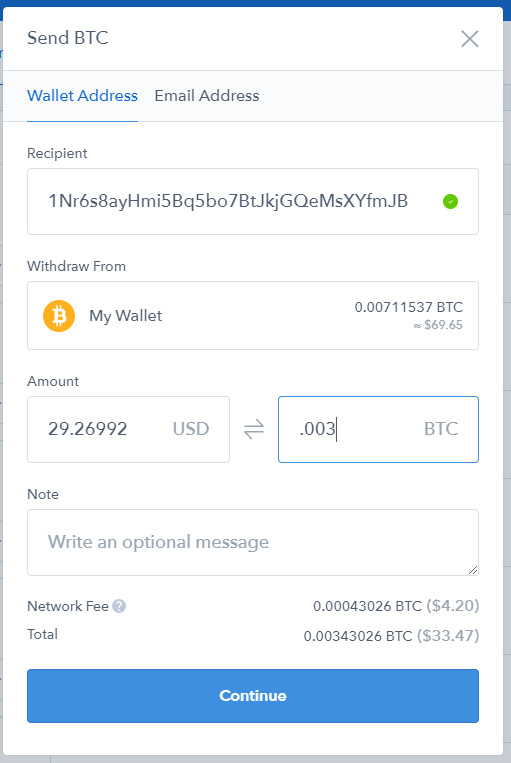 After you hit continue, there will be a screen to verify (Coinbase), and after you have confirmed that your address is where the currency is going, hit send. Within a few minutes, your wallet should recognize that the transaction is on the network. It won’t be fully transferred until a miner has found the transaction and placed it in a block. This process takes on average every 10 minutes.

Once a miner has added your transaction to a block, it is considered to have one confirmation. Each block that gets added to the blockchain is an additional confirmation. So after five blocks are added, the transaction has five confirmations. As I mentioned above, confirmations, which is part of mining should be covered in its own post.

You now own your cryptocurrencies and you are your own bank! Within your wallet, you can send funds to other addresses or hold them. If you want to convert back to fiat currency the easiest way is through an exchange. You can send that money back to the exchange and from there exchange it back to fiat. Or find a friend who wants to buy some cryptocurrencies and help them set up a wallet. They will give your fiat and you can send them some coins!

This was a very simplistic view of cryptocurrencies and glazed over many important topics such as mining and proof-of-work.

If you only remember two things it would be this:

If you have comments, additions or questions please email me!