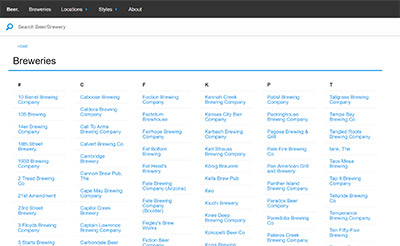 When I was living in Colorado, I had a wide variety of beers and breweries I could visit. I was active in two homebrew clubs and wrote beer reviews for a national magazine.

One evening a group of us were drinking beer, and a friend turned to me and asked what I thought of a specific beer. I replied that I didn’t know if I had tried it. He replied that I had, last year, and recited the exact event we were at! I don’t have that type of memory, and hence the beer database was created!

At the time, there were online beer rating tools, but they didn’t suit what I needed. I needed a platform that was fast loading, and editable on all devices.

My beer database is written in PHP with MySQL as a database and built with the responsive framework Foundation. The clean and simple design was intentional to make it quick loading on my phone. I have optimized it over the years to make it easier to use and find content.

The project is built with objects: Breweries have Beers which have Reviews. Each review is created on a no-SQL approach and can have multiple fields attached to it. A great example of this is New Holland’s Dragon’s Milk Bourbon Stout which has multiple reviews that are different formats.

There are thousands of beer reviews in there over the past decade. Some were entered from score sheets and edited for accuracy; others were quickly written down from my phone using shorthand. Please don’t judge my spelling and grammar from these notes!